Frank Zappa said “writing about music is like dancing about architecture” so I guess you could say the same thing about writing about flying. Except that while I don’t know anyone who dances about architecture, there are many brilliant aviation writers. In the 70s when I was learning to fly, I started with Dick Collins and Barry Schiff. Then I discovered Antione Saint-Exupéry, Ernie Gann, Rod Machado, Bill Kershner, Wolfgang Langewiesche, Paul Bertorelli, Paul Berge, and Mike Busch.

And there are brilliant books about aviation written by people who aren’t necessarily pilots, like The Wright Brothers by David McCullough, Failure is not an Option by Gene Kranz and The Right Stuff by Tom Wolfe.

After consuming a lot of writing in the 70s and 80s, by the 90s I was ready to try it, and a random government decision gave me my chance. Until the early 90s, there were five TRACONs in Southern California. To cut costs, the FAA decided to merge those five into one giant TRACON next to NAS Miramar, which became a MCAS a few years later. I dropped a note to Paul Bertorelli – editor of IFR magazine – offering my assistance as a local contact for the article I was sure he was going to write about the merge. He told me that he had been talking to Mike Busch about it, but that Mike had become busy with another project, so I should just go ahead and do the research, write it up and send it in. I did, they published it, and seeing my first aviation article in one of my favorite magazines was somewhat like the first time I heard my music on national TV.

Mike Busch had been sysop of the AVSIG on CompuServe, and that project he was busy with was starting AVweb. By ’98 AVweb was in full swing, and when I heard they were putting together a news team to cover Oshkosh that year, I knew I wanted to be there. One of the ambitious projects was to cover then-FAA administrator Jane Garvey’s live conference with pilots. We had minimal audio equipment, so I set up a mic next to the PA speaker and we used Real Audio to stream it, and most people listened on a 1200 or 2400 baud modem.

My roommate for the week was Michael Maya Charles, a FEDEX captain with a nice Cessna 185, also a great writer and photographer. Michael and I made the rounds one day and ran into Wayne Handley, who had just finished his airshow in the Raven. After about an hour of great stories, we moved on, but that chat gave me an idea.

Music magazines are full of interviews with players. How did you get started? Which is your favorite guitar and why? Challenges, accomplishments, plans for the future… As far as I could tell no one in aviation was interviewing noted and accomplished pilots that might not be household names. Obviously there were 100 interviews with Col. Yeager and Dick Rutan – who deserve it – but not so much for the less-well-known pilots.

So I proposed a series to AVweb called Profiles – interviews with people with great stories to tell. The Wayne Handley interview was the first to run, and when I stopped in May of 2003 I had interviewed and published 52 Profiles. 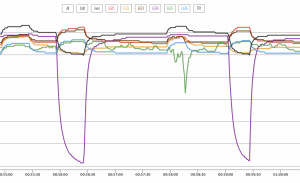 Fast forward eleven years. I hadn’t done aviation writing during my education years, but in 2014 I took over a monthly column called Puzzler sharing examples of what was indicated by unusual engine monitor data. October 2022 was my 96th Puzzler.